Slightly over a year ago, I embarked on my first-ever backpacking trip with Eric as my guide. We had carefully selected a section of the Ozark Trail: part of the Between the Rivers section plus a loop that ran along the Eleven Point River. We also had heard there was a climbable lookout tower in the area. With the whole weekend free, we had our hearts set on covering 19 miles over 2.5 days.

Upon our arrival after almost a 4-hour drive, we pulled into the parking lot of the Sinking Creek Lookout Tower. To our great disappointment, although the tower is still standing, the lower portions of the ladder have been removed to prevent climbing. Eric tried to convince me to monkey my way up to the ladder, but I had not driven four hours out to the middle of nowhere just to visit the hospital. Despite our disappointment, we were eager to get into the woods and soon began our search for the trailhead.

The Between the Rivers section of the Ozark Trail crosses a national forest vehicle path a short distance from the Sinking Creek Trailhead. Knowing this, we headed that way, chatting away about our plans for dinner that night after we set up camp. About 20 minutes later, we arrived at a wide forest service road. Immediately, we realize we had missed the start of the Ozark Trail and had to retrace our steps 1.5 miles. To our surprise, we nearly missed the trail the second time as well. Having never hiked any part of the Ozark Trail, we had expected it to be a bit more noticeable, but it is little more than a blaze marking slightly tamped down leaves.

After our mishap with finding the beginning of the trail, the rest of the evening hike went smoothly. The beginning of the trail, at the lookout tower, is the high point of this part of the Between the Rivers section of the Ozark Trail. We hiked downhill 2 miles and camped at Gold Mine Hollow at the bottom of the valley the first night. We found a flat spot next to the creek on the other side from the trail for our tent, warmed up some beans for dinner, and settled in for a chilly night. This section of the Ozark Trail is in the best light pollution gap Missouri has to offer, so the stars kept us company.

Due to our accidental 3-mile detour at the beginning of the trip, we were a bit behind schedule. Despite keeping up a quick pace, we were still able to enjoy the beauty of the Missouri forest. The remainder of the Between the Rivers section contains 3 major ascents, each gaining well over 200 ft of elevation. This makes for a challenging trek, especially at a fast pace with heavy backpacks.

Around lunchtime, we had completed the Between the Rivers section and reached the national forest road that intersects the end of the Between the Rivers section of the Ozark Trail and the beginning of the Eleven Point Section. The Eleven Point Section connects to an equestrian trail that winds along the Eleven Point River, which we’d originally intended to take back. We stopped for lunch, and while sitting on two logs and munching on our Wowbutter and honey roll-ups, it began sprinkling. Shocked, we checked the weather radar and saw that heavy thunderstorms were predicted to roll through the area that evening. After much deliberation, we decided to use the remaining daylight to walk back to the car, rather than forge ahead and brave the storm. After the chilly night before, we didn’t want to risk getting soaked.

We left behind our comfortable logs where we sat for lunch and began on the Mark Twain National Forest Service Road 3152, which runs all the way back to the Sinking Creek Lookout Tower parking lot. So, rather than taking the long, arduous walk back through the forest, we opted for the faster route along the gravel road to beat the rain. And boy, were we glad we did. After stopping for dinner at the Tater Patch in Rolla, we drove through a torrential downpour the whole way home. Had we stayed and camped that night, we most likely would have been miserable. We are still bummed that we were unable to finish this trip, and we plan to return soon to try out the Eleven Point Section. 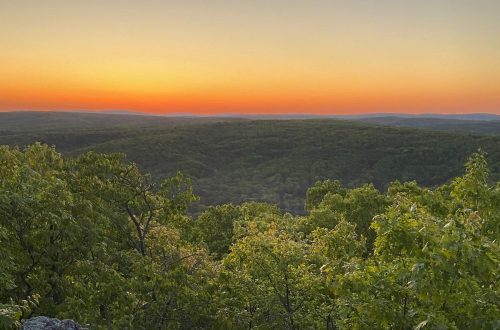 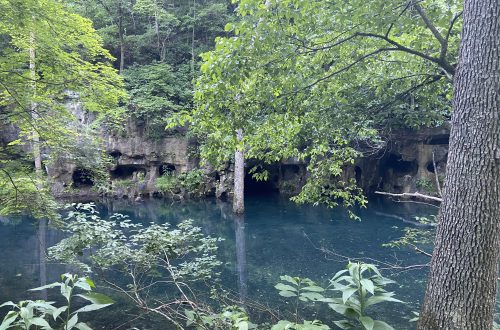 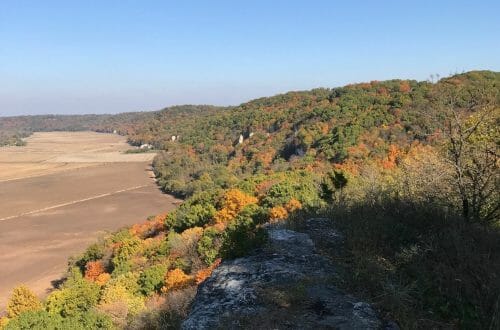